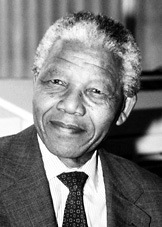 Dedicated to the memory of Nelson Mandela

As a result of the collecting works of the Armenian Genocide Museum-Institute, a rare document was found, which witnesses a humanitarian assistance of a South African tribe to the Armenian orphans in 1921.
One of the reverends of the Independent church of South Africa, from the name of his community of 250 people, made a contribution to Armenians, who were victims of the Turkish barbarity, in the case when they were also in poor conditions.
This is a unique testimony of the protection of human rights and humanism, which recognizes no racial and geographic restrictions or boundaries.
Below we present the whole article without any changes.

"Not long ago, in fact quite in the present, a certain group of Kaffir folks came to know Christianity and to understand Christian ideals and aims.

Just how they came to know of the needs of their Christian brothers in the Near East, we are not quite certain, but come to know of them they did, and in the spirit of their new enlightenment they sent to Near East Relief a contribution of money to buy food for the hungry people of Armenia.

This money lost none of its value in travel, nor did the kindness that inspired the act drop any of its richness by the roadside. Rather, the remote thought and its practical spokesman bear a quality of picturesqueness that intensifies their value and usefulness.

J. D. Mbengo-Nyangi, minister of Independent Church, East Bank Location, East London, South Africa, sends us the accompanying photograph. His congregation numbers 250. The men in the photograph are those of his congregation that he could coax to overcome their superstitions sufficiently to face the camera. The first two rows are red Kaffirs, those who paint themselves with red ochre and go about the village in a nude state. Those in the background, in coats and even a few collars, were no more civilized than their brothers and sisters two years ago.

But whatever the state of their civilization, the binding note of Christian charity is in their hearts, and there are those who would otherwise have starved in the Near East who can think of them with a thought as linking as charity - that thought is gratitude." 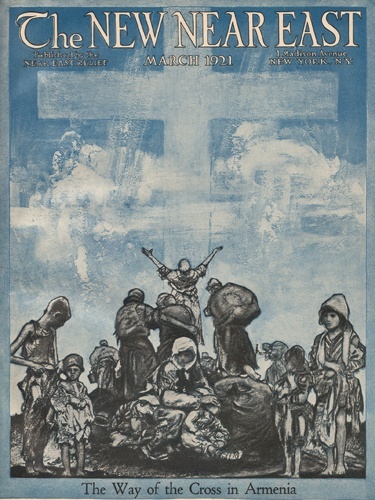 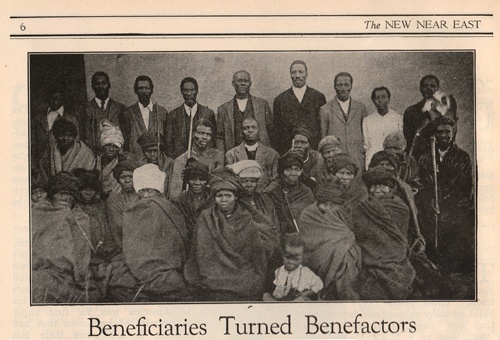