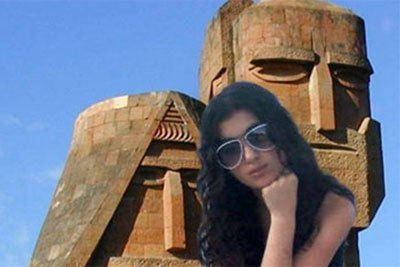 13 year-old Adeliana Avagimyan from Stepanakert, the capital of Artsakh, has written a letter to Azerbaijani President Ilham Aliyev.

Below are some passages of the letter.

Mr. President. My name is Adeliana Avagimyan, a school pupil from Karabakh.

I haven't told anyone that was writing this letter to you. In fact, I thought long and hard about writing it or not.

I was born and raised in Stepanakert. I love my country because Karabakh is my homeland. My parents and grandparents were also born here.

So were their forefathers. Do you know that Karabakh was originally called Artsakh, a region of historic Armenia?

Mr. President, whenever I watch TV or listen to what older folk are talking about, I am amazed. It seems that you are constantly talking about Karabakh and about war. Aren't there other issues on your mind?

I have never seen any Azerbaijanis. I do not think about you or your country. It's the same with my parents. I can't understand what it is that you want from us.

I have heard that you have never been to Artsakh – to our Gandzasar, our Dadivank or Amaras – but you want to conquer our country.

Don't you have enough land already? Why do you need our Karabakh?

My father fought in the war. I have never seen war but my elders say it is a terrible thing and I don't want to experience one myself.

But my elders say that if war breaks out again they are ready to defend our country once more. I too will assist in whatever way I can.

I have asked my parents why it is that we won over your overwhelming forces. They answer because we were on our lands, defending our country, and that the Azerbaijanis came to conquer us, to steal our freedom.

If you start a war to conquer us, the entire Armenian people will rise up to defend our lands.

I am sure that if you start a war, you and your children and relatives will not fight. You will send common Azerbaijani youth to fight for you.

I know that many of us, even women and children, will die if war breaks out.

But thousands of Azerbaijani youth and children will also be sacrificed and left orphaned.

Is this want you want?

Why spend all your money on buying weapons for war?

Shouldn't you be spending it on creating a better life for your people and for improving conditions for those refugees created by the war started by your father?

I would really appreciate it if you would answer my letter and explain why you want to conquer my homeland.