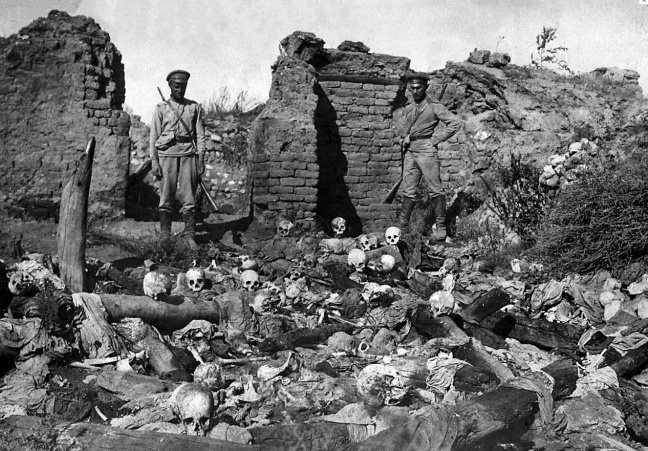 Despite what some sub-editors might think, the genocide of 1.5m Armenian Christians in 1915 was not a holocaust

What’s in a name? Let’s start with the Persian Gulf. Or the Arabian Gulf. Or just the Arab Gulf. I’m indebted to reader (and surgeon) Ross Farhadieh for complaining to me last week about my use of “The Gulf” – bland, dull and historically anaemic – in a column on Iran and its possible return to geopolitical power in the Middle East. Historically, legally – and in the UN – Ross told me, it should be called the Persian Gulf. It was Gamal Abdul Nasser’s nationalism which renamed it the “Arabian Gulf”.

And Ross is right. And I think I know the background to this slippage in nomenclature. When I worked in the Middle East for The Times – long before Murdoch emasculated the paper – we found that whenever we referred to the Persian Gulf, Arab states would refuse to let the paper go on sale in Dubai or Cairo. But whenever we called it the Arabian Gulf, the paper was not allowed into Iran.

So we went for “The Gulf”. Maybe this was a bit cowardly – I wasn’t involved in the decision – but many other papers followed suit. The British press was not going to be censored in the Middle East if a little historical obfuscation could be built in to our copy. The Independent, still unborn at the time, referred quite innocently to The Gulf once it began publication – probably without the slightest idea of why it didn’t carry the Persian or Arabian appellation.

We’d always had a faintly similar problem with Northern Ireland. In the worst days of the war there, we on The Times often used “Ulster” as shorthand for the six-county province – only to find that Irish readers in the Republic took great exception to the name. Ulster, they rightly pointed out, historically contained nine counties, which included the three counties of Donegal, Cavan and Monaghan, which the Protestant seigneurs of the north declined to accept in Northern Ireland because (of course) these three counties had too many Catholics. Irish republicans – or just plain Irish citizens – preferred the “Six Counties” or, at a push, Northern Ireland. They were right. But since The Times still sold in the Republic, we went on using Ulster when we felt like it. Indeed, my first book on Irish history included the word Ulster in the title. And it meant six, not nine, counties.

I tended to take a harsher view of countries whose titles began with the words “the People’s Democratic Republic of” – mainly because they invariably belonged to their dictators rather than their people, and were neither popular nor democratic. Yemen – or the PDRY – for example. So we called it just Yemen – or Algeria, which also likes to call itself popular and democratic.

Then we had to acknowledge Father Time. My dad, a veteran of what he called “The Great War” of 1914-18, went on calling it that long after the second and even more titanic bloodbath had been fought around the world. The Brits officially decided to call the Great War the First World War – in, I think, 1948 – because they had to yield to history. My dad’s war had not proved to be the war to end all wars after all, and we had to acknowledge that. I still like the epic ring of The Great War – but by 1945, the Great bit simply didn’t work any more.

Other Great War events remain contentious, not least what I always refer to as the Armenian Holocaust (with a capital “H”), the genocide of 1.5m Armenian Christians at the hands of the Turkish Ottoman government in 1915. It was the first industrialised genocide of the last century – the second being the Jewish Holocaust – and the two mass acts of slaughter had clear historical connections. The Turks suffocated thousands of Armenians in caves – by blowing smoke from bonfires into the cavities where they had imprisoned them in the Syrian desert – and thus created the first primitive gas chambers.

Armenian men were sometimes taken to their execution in railway goods wagons. And junior members of the German Kaiser’s army who were training the Turkish army at the time witnessed the genocide; more importantly, some of the names of these Germans turned up less than a quarter of a century later as members of Hitler’s Wehrmacht in the Ukraine and Belarus, where they were helping to organise the mass killing of Jews. There’s no doubt where they learned how to do that.

Many years ago, therefore, I used the phrase “Armenian Holocaust” in The Independent. A sub-editor immediately changed the capital H to a lower-case h. My phone did not stop ringing. Armenians were outraged. Why did they not deserve a capital H, they demanded to know? Didn’t the Turks murder enough Armenians to qualify them for a capital H? I wrote a long memorandum to my then editor, Simon Kelner, explaining that it was racist to make a distinction between two genocides; we could not base our definition on the numerical difference between 1,500,000 and 6,000,000. Besides, Israelis (as opposed to the state of Israel, which doesn’t even regard the Armenian catastrophe as a genocide) refer to the Armenian massacres as the Armenian Shoah – using the Hebrew word for Holocaust. Kelner later published my memo as an article in The Independent – and it won the DC Watt journalism award.

But we newspaper folk have poor institutional memories. Earlier this month, I again referred to the Armenian Holocaust – and a sub-editor, unfamiliar with the expression, innocently downgraded the poor old Armenians again. He changed the capital H into h! My phone trilled once more. The same unanswerable arguments. Didn’t the Turks kill enough of us, my Armenian callers asked again? So of course we sheepishly upgraded the Armenians on the website version of my report and returned to them their capital H…

And of course, I haven’t even begun to address today the use of that generic, racist (in its use), pejorative and repulsive word “terrorist”. I only use it in inverted commas for direct quotations. But what can we do when the masters of the universe – America and that dreadful chap who’s just won a Save the Children award – long ago embarked on an everlasting “War on Terror”?

Give me the Persian Gulf any day.