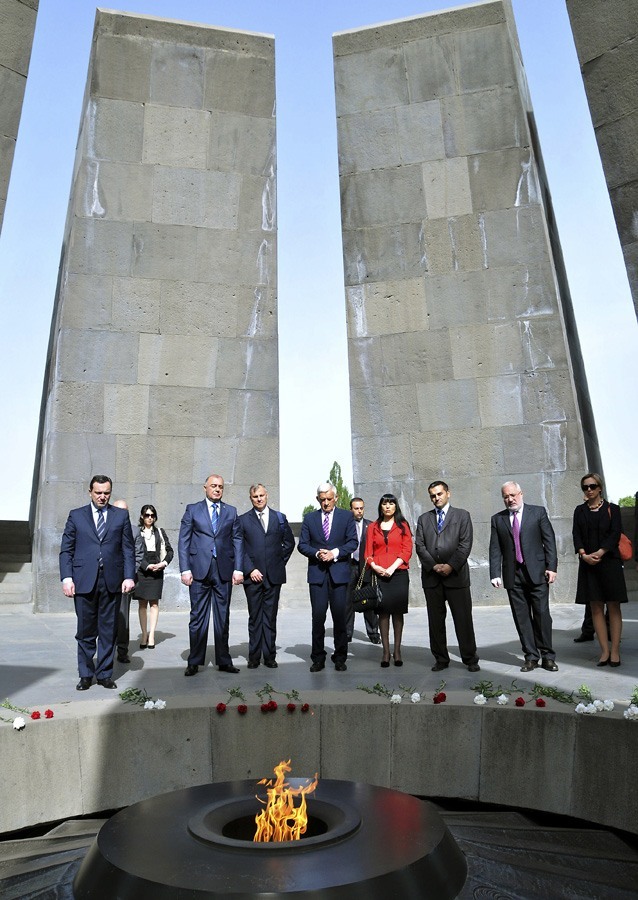 NEW YORK—A team from the Yerevan State University will among more that 400 of the brightest young minds from around the world who will travel to New York in July to showcase their innovative ideas for using technology to solve the world’s toughest problems.

As the winners of regional, national and online Imagine Cup competitions, these high school and university students represent the pinnacle of innovation, creativity and entrepreneurialism from 73 countries and regions around the globe.

The Armenia team, called X-Tech, will compete in the software design competition.

This year, more than 350,000 students from 183 countries registered for Microsoft Corp.’s Imagine Cup, the world’s premier student technology competition. The 124 student teams secured their places at the July 8 to 13 Worldwide Finals event, where they will demonstrate technological advancements in problem-solving and compete for international recognition and $215,000 in cash prizes in categories including Software Design, Embedded Development, Game Design, Digital Media, Windows Phone 7, IT Challenge, Interoperability Challenge, Windows 7 Touch Challenge and the Orchard Challenge. The students’ projects tackle serious humanitarian issues, often inspired by the United Nations Millennium Development Goals, such as the environment, health, accessibility and education.

“Some of history’s greatest inventions were created by students. With the Microsoft Imagine Cup, students apply their innovative thinking to real-world causes in order to generate the future’s greatest inventions as well,” said S. Somasegar, senior vice president, Developer Division at Microsoft. “To see young innovators and entrepreneurs harness their creativity and talent to benefit a greater good is absolutely inspiring.”

Last year, Team GINA from the Czech Republic was among the finalist teams that competed at the Imagine Cup 2010 Worldwide Finals in Warsaw, Poland. The team developed GINA (Geographical INformation Assistant), an innovative software system for mobile equipment that provides navigation in difficult terrain, helps coordinate rescue teams, and enables the efficient exchange of geographical information. Together with the humanitarian organization Hand for Help Europe o.s. and its partners, the GINA system has been deployed in Haiti to track the progress of the cholera epidemic, and recently has been helping rescue workers in Japan monitor areas affected by the recent earthquake and tsunami that devastated the country.

“Technology has tremendous potential to solve humanitarian problems, and the Imagine Cup gave me a platform to share my ideas for making the world a better place,” said Team GINA member Zbynek Poulicek. “The Imagine Cup was also a launching pad to start my own business and have an impact in places like Haiti and Japan.”

2011 marks the first time that the Imagine Cup Worldwide Finals event, now in its ninth year, will take place in the United States. Although the primary focus of the gathering is the competition, the finalist teams will also have opportunities to attend special training sessions, meet peers from around the world, and participate in volunteer and cultural activities while in New York. The final event of the competition, the Imagine Cup World Festival and Awards Ceremony, will take place on Wednesday, July 13.

STEPANAKERT—The Stepanakert Airport will meet all international standards and conform to security norms, said Mayor of the Nagorno-Karabakh Republic, Vazgen Mikaelyan in an interview with the Voice of Moscow radio.

He said the Stepanakert Airport will operate in the same vein as it did in the 1980s, when it conducted Stepanakert-Yerevan flights.

“The opening of an airport is a necessity, with flights to facilitate travel opportunities both for Artsakh residents and guests of the country. I don’t believe that it runs counter to international norms,” the mayor stressed, adding that every possible measure will be taken to secure normal operation of the facility.

Meanwhile, the Aviation Subcommittee of the Armenian Public Council and the Artsakh Civil Aviation Department will hold a joint meeting in Stepanakert from May 26 to 28 to discuss preparations for the launch of the Stepanakert-Yerevan flight and mechanisms necessary such as ticket pricing, flight control and airspace usage.

Head of the Artsakh Civil Aviation Department, Dmitry Atbashyan told PanARMENIAN.Net earlier that Stepanakert airport is scheduled to be opened in summer.

In his interview to the Voice of Moscow, Stepanakert Mayor Mikaelyan said the city is rapidly developing.

“We must provide residents with normal, comfortable accommodation for living. First of all this relates to the utilities and communication system,” said Mikaelyan, who added that a program to provide 24-hour water supply to residents will be implemented in 2012.